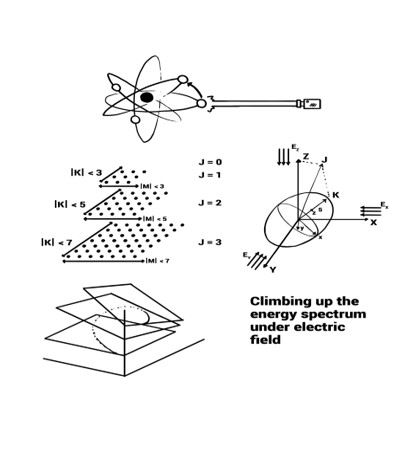 20 Jan Quantum control from a mathematical point of view

What is the spectrum?

Every scientist who deals with quantum mechanics works in his everyday life with the spectrum, or energy levels, of the object that is investigating. But what is the spectrum?

For example, the Bohr picture of an atom is an orbital structure, where each orbit corresponds to an energy level. Energy levels as a whole are the spectrum, which we may also say that it tells us what we can infer from an experiment.

In my research, I am studying how to «climb up» the spectrum of a given object (for example a molecule) in order to steer it to a desired configuration. This is what we call controllability of a quantum system.

For example, I might want an electron to jump from an orbit to another. This is possible: just feed the electron with some energy. In everyday life, if we do some sport, or just «jump» from home to university, we need energy: we have to feed us with some (hopefully good) food.

In the same way, to jump from an orbit to another, the electron needs energy. This is the reason why the spectrum is called by physicists the energy levels. Now we come to the idea of controlling a system, which is clearly fundamental in the development of technology. Starting from the first car, passing through the man who reached the moon, and arriving at our smartphone: all this is possible thanks to the control theory. Beside this… there is mathematics, obviously!

How can we control a system?

First of all, we have to act on it, with some external forces: engine and wheel to control a car, electric or magnetic fields to control molecule dynamics. A control can be then modulated, depending on our purpose: intense control to minimize the time of a trajectory, slow varying control in order to keep the system in a quiet state. As low varying control strategy is called adiabatic. In this case, the system does not feel very much the external force, and it evolves in an almost free way.

For example, we can consider a pendulum, in a quiet state. If we start moving it very slowly, it could start oscillating, though very slowly and close to its equilibrium position: we are acting on it adiabatically.

Climbing up the wall

My work consists in using spectral intersection and adiabatic control to steer the system towards its energy levels, climbing up the spectrum very slowly. In general, things might seem very hard and abstract in mathematical and physical research, but keeping in mind our goal, we can climb every wall and there, on top of it, breath the feeling of discovery.