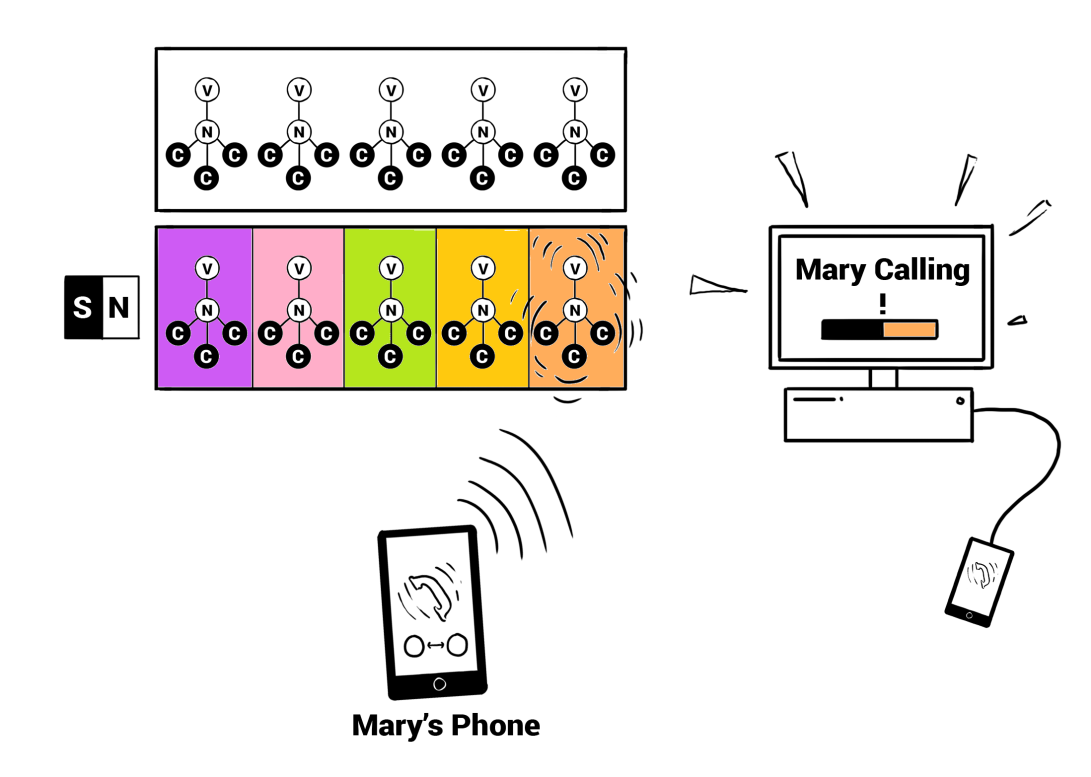 Since ancient time diamonds have attracted men and women for their fascinating optical properties… but these are far away from being completely understood by scientists. In the last years some particular diamond impurities, called NV centres, have become extremely interesting in the science community for their quantum and optical properties.

But what is an NV center?

Diamond is made of carbon atoms arranged in a well define structure: tetrahedral! Many of its properties are linked to the way in which the Carbon atoms are disposed. That’s why diamond and graphite (the tip of you pencil) are so different even if both are made of the same atoms.

Although very well arranged, Carbon atoms are not so exclusive in their relationships and sometimes they like hosting in their wonderful lattice some friends. This is the case of our shining couple, Mr Nitrogen and Mrs Vacancy, which we can find in the diamonds lattice, at the place of two carbons atoms. Here the Nitrogen Vacancy center! 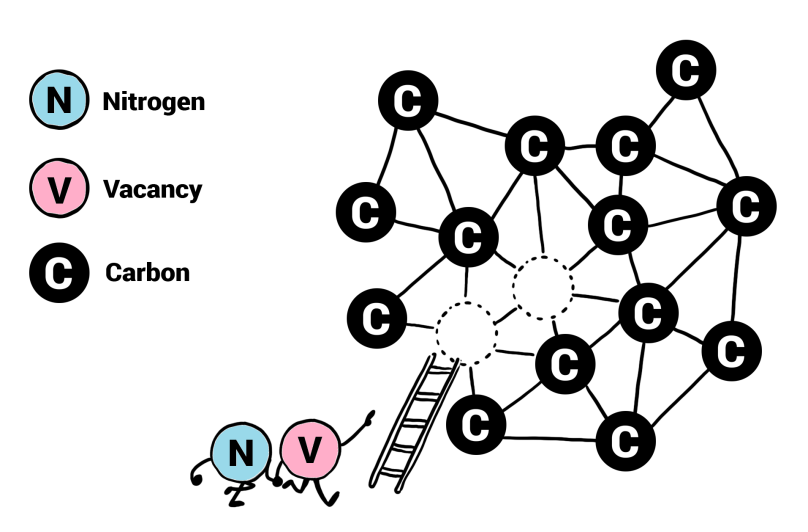 NV couple has a really fancy propriety, it is colored! That is why scientist call it colour center of diamonds.
More in details, each time some green light is send on the diamond, the NV center starts emitting red light. This is a really known physical propriety called fluorescence. It happens each time an object absorbs light that has more energy than the light that emits  (for example absorbing green light and emitting red). Just to remind you, the light energy increases moving from the red to the violet on the rainbow colour.

But this is not the only propriety of our attractive NV couple… Indeed the NV center can be in two moods: a bright and a dark one. In the first one, the NV center emits more than in the second one. Scientist say that these two levels (moods) have different energy! A two level system is one of the most important system in Quantum Physics. You can better understand it by either achieving a bachelor’s in Physics or going outside and play with some friends at the jump rope. I prefer the second, but you can chose! For sure in the second case you need some more physical effort, because you will be the friend that will jump!

Jumping the rope: the importance of being resonant

At the beginning you and the rope are at rest, this is our bright state (Level 0)! As soon as you friends start moving the rope, you have to start jumping. This is the dark state (Level 1) . In order to be in the dark state you have to jump at the same velocity (frequency) of the rope otherwise you will fall dawn and the rope will stop moving: you will return in your bright state. This condition, for which you and the rope should have the same frequency,  is called Resonance.  And for sure as far as your friends put more energy in moving the rope, you have to jump faster (at an higher frequency) to be in resonance. We can easily schematize that with two level at different energy. The bright level with zero energy, the dark level with an energy due to the force your friend apply to move the rope. The resonance frequency is linked to the energy between the two level. When there is a resonance, the system can go from the zero to the first level.

NV centers are our rope…. But how can we control NVs?

The power of magnets: Zeeman shift and magnetic resonance

We can use a magnetic field…. Or maybe two! The first one just changes the energy between the two levels (this phenomena is called Zeeman shift). Like your friends with the rope. In practice, you just need to put a magnet near the NV. The more the magnet is near the NV, the stronger is the magnetic field and the more is the energy of the first state. The second magnetic field is a microwave (MW) field, and it is you! A MW field oscillates at a certain frequency. Only if this frequency is the same of the NV center frequency, NV can go on the first level. This is the main idea behind the magnetic resonance.

Using a simple camera you can understand if the NV center is in the bright (more light) or in the dark (less light) state. And you have the dark state only when the MW frequency is in resonance with the NV frequency, that is link to the static magnetic field of the magnet.

In this way the MW frequency and the magnetic field are linked. If I know one, I can deduce the other.

In our experiment we put a diamond with lots of NV centers near a magnet. In this way each NV center has a different resonance frequency, since it is at a different distance from the magnet. Now we can do two things: