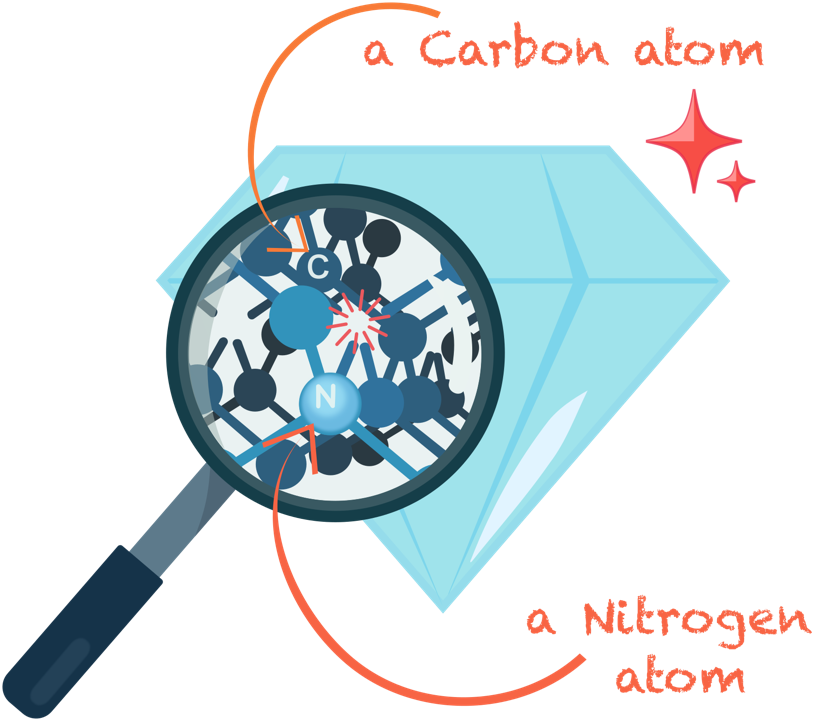 21 Oct From seeking the origins of the universe to designing next generation technologies… It’s all about sensing.

The wonder is, not that the field of the stars is so vast, but that man has measured it.

Who has never dreamt about discovering the origin of the universe or even life?

Our understanding of the world and intrinsically scientific advances rely on our capabilities to see ever further, far beyond the limit of our vision. No matter if we try to observe single molecules or distant objects in the sky, the fundamental problem is the same: we need tools with better accuracy and precision. The current state of scientific research is such that we are able:

And this is only to name a few. Even so, a lot of challenges are still remaining. To understand this, we can have a look at two distinct parts of the scale right below. 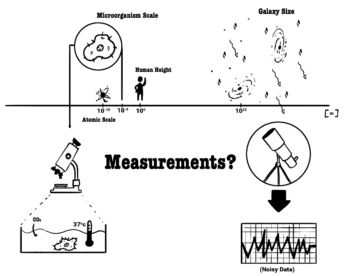 In a very caricatured picture, biologists deal with microscopic objects in a complex environment and under physiological conditions (conditions for cells or an organism to live, like ambient temperature and pressure). On the other hand, astrophysicists deal with extremely large objects, so far from Earth that their detectable signal has diminished to a point it almost vanishes against the background. All these conditions make measurements challenging even with state-of-the-art techniques.

Two points are crucial to perform measurements on those systems: we need sensors with outstanding capabilities and a smart way to control them.

Defects in diamond: more than showing a colour, they can perform as sensors!

One of the most promising sensors is based on the Nitrogen-Vacancy (NV) centre in diamond. 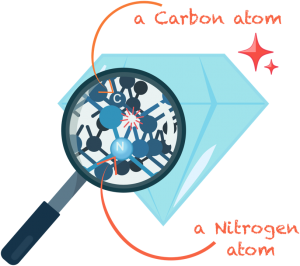 To understand what is a Nitrogen-Vacancy (NV) centre, we need to look at the diamond structure on the atomic scale. There we can see Carbon atoms arranged in a specific way that grants the diamond its outstanding hardness. And because diamonds are not perfect, it is possible that some Carbon atoms are substituted with other elements from the periodic table. For example, it can be replaced by a Nitrogen atom, a Boron atom, or even be unoccupied, which is what we refer as vacancy. Despite their designation, what we call here “defects” are not, as we could think, shortcomings: without them, diamond would be as transparent as a piece of glass and would be less fascinating. Indeed, these defects can result in different colours of diamonds as shown in the picture below.

Besides this aspect, the defects give specific properties that make them of great interest for scientific research. When the defect is composed of a Nitrogen located right next to a vacancy, it forms the so-called NV centre.

Via the interactions of NV centres with their environment, it is possible to sense a large panel of physical entities such as electric and magnetic fields, temperature or pH for example. Plus, when embedded in the diamond lattice, they are chemically inert and they can be manipulated at room temperature permitting non-invasive experiments. These properties make NV centres particularly advantageous for life science applications: we can imaging using them to study proteins in vivo  or to sense brain activity. In addition, they can be employed in a much broader range of experiments. For example, NV centres can be used to image magnetic fields produced by geological samples or current flowing through electronic components. In this sense, NV centres constitute remarkable polyvalent sensors that could sooner or later constitute the backbone of the next generation of sensors! 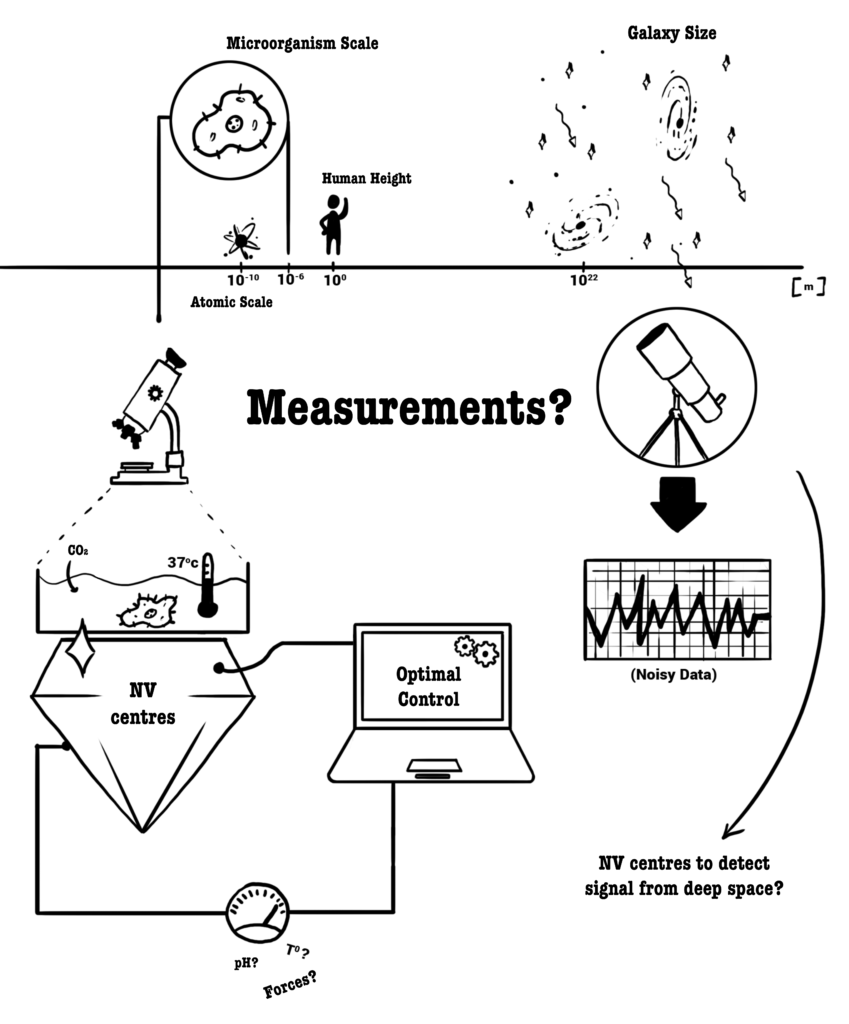 Optimal control provides a route towards the next generation of sensors

Sensors need to be cleverly controlled to sense specified fields and filter out the ones we are not interested in. For this, we apply specific microwave irradiation schemes to the NV centres. Using these schemes, we can tune the sensitivity of the NV centres to the fields of interest so well that the accuracy is comparable to measuring the distance between San Francisco and San Diego to within 1 mm! 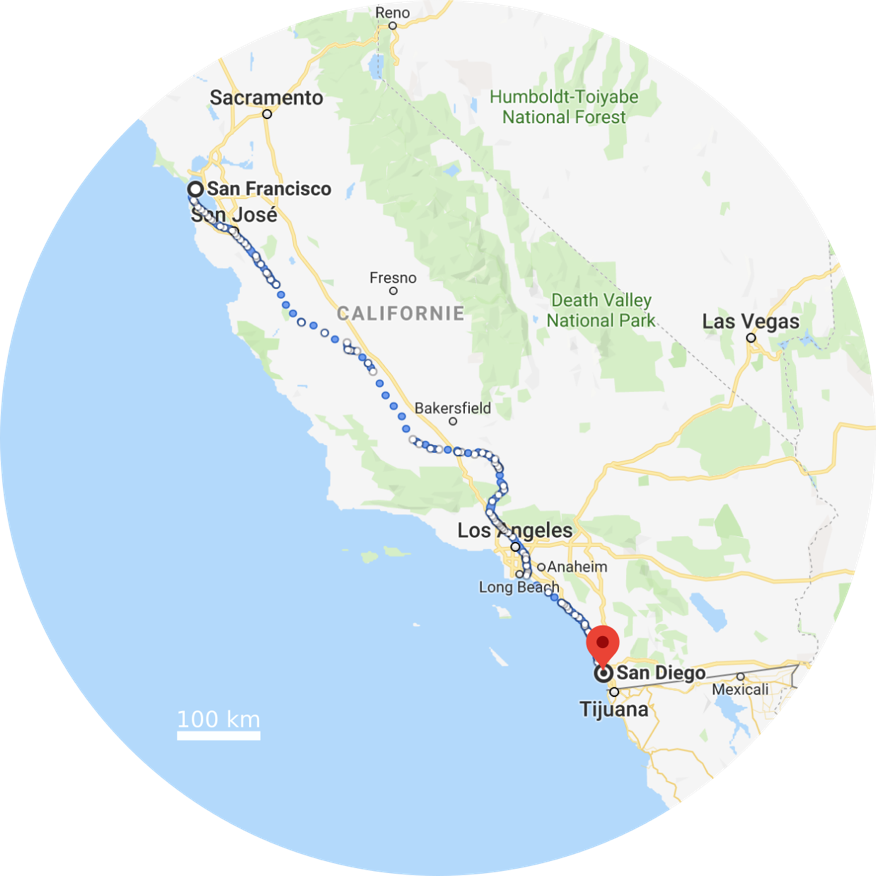 Even so, this is not enough for some experiments where a better accuracy is required. In order to achieve this, we try to optimize these microwave radiation schemes to go beyond the current sensing capabilities reached with NV centres. For this purpose, we make use of optimal control theory.

This consists of applying algorithms to calculate the best way to achieve a given task while taking some constraints into account. For sensing experiments, you may want to realize the experiment in the shortest time possible. For this, the experimental parameters we can control are considered and the algorithm calculates the right setting for each one. To illustrate this, we can think of it as though we were planning a bike ride between San Francisco and San Diego. Here, we also want to complete the route in the shortest time possible. Accordingly, the algorithm considers the landscape: whether the path is accessible by bike or not, whether it is better to take a detour for a flat path instead of a very steep one and so on. This is exactly what your navigator does and now we are applying the same technique for sensing!

By combining a sensor that has exceptional properties with an optimized control, we can build up a new generation of sensors that I will call “smart sensors”.  Using them, we can start measuring new fields and trying to understand the world a little better and here’s a little secret: this is exactly what we are doing in research!